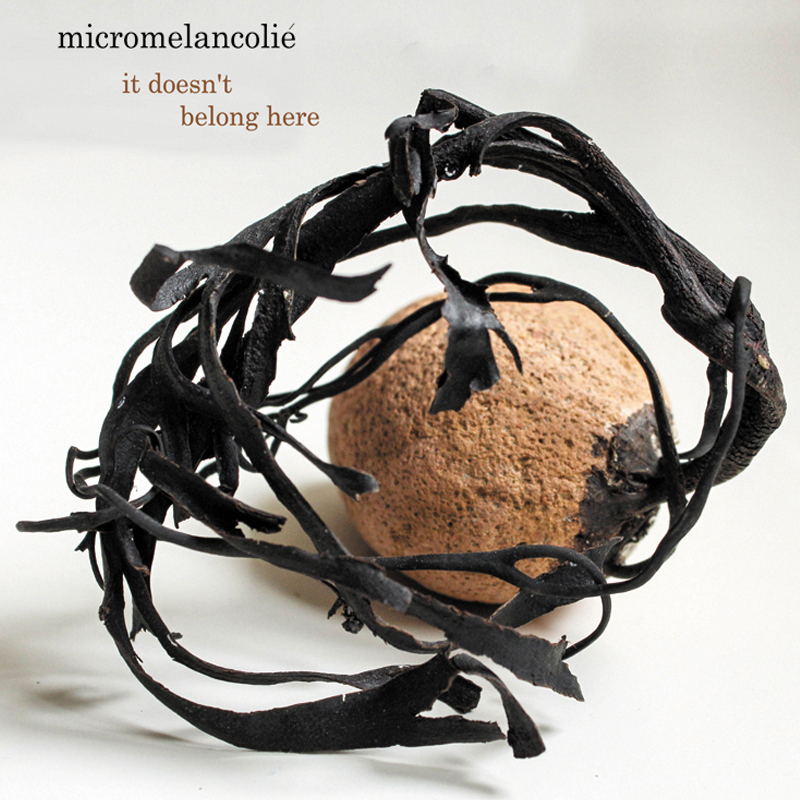 Vital Weekly:
Drones are something that is also of interest for Robert Skrzynski, who calls himself Micromelancolie. We know him from the two releases he did with Sindre Bjerga (see Vital Weekly 890 and 906) as well as a solo release on BDTA (see Vital Weekly 902). Here is his first solo CD, although on one piece he receives help from Mia Zabelka, the well-known violinist from the Polish improvised music scene. That piece was build from dark drone sounds and low scratched violin sounds and takes up a bit too much time to be fully interesting. In the two shorter pieces ‘wedding Songs And Funeral Laments’ and ‘Greeting And Farewell Songs (In Three Parts)’ there is a strong influence from Machinefabriek, especially in the way the guitar is used. The final track is ‘Greeting And Farewell Songs (In Four Parts)’, which is thirty-three minutes, and starting out with a more or less ethnic field recording, and then moving over into more field recordings (bicycles, I think at one point) and rattling low percussion samples. There was a nice low-resolution sample pack here, which I enjoyed a lot. It didn’t remind of me anything in particular, and yet a lot of other things. Machinefabriek (again), but also Rapoon, zoviet*france and others from the world of industrialized ambience, or atmospheric mechanizations. Perhaps not really a big new surprise this release, but everything was well-executed and as ambient music it worked very well.

ChainDLK:
This album according to his linear note ‘is a trial at merging two worlds together: traditional praise, wedding and funeral songs with contemporary avant-garde music’ but really is based on the juxtaposition of field recordings with ambient music. However the result is less predictable than it could seem as the tracks are structured with a path in mind rather than being an void exploration in search of something musically interesting.
The drones and the field recordings, colored by glitches and noises, of ‘Wedding Songs and Funeral Laments’ open this release as an introduction to ‘It Doesn’t Belong Here’ focused on the performance of Mia Zabelka using extended techniques to obtain various resonances matching with the underlying soundscape orchestrated by Robert SkrzyÅski. ‘Greeting and Farewell Songs (in Three Parts)’ is a quiet and mediative introduction to ‘Greeting and Farewell Songs (in Four Parts)’ the longest, quite an half of the duration of the album, track of this release constructed as a musical journey where the drones are the canvas where the field recordings paint the expected mood.
This album tries to search new grounds reasoning on structures rather than searching some weird new sound. It’s not something enjoyable for everyone but it’s worth a listen for the fans of experimental music. Really nice.

Heathen Harvest:
Whether they be perceived as symbiotic, imaginary, or ultimately personal, Micromelancolié‘s It Doesn’t Belong Here is, more than anything else, an album of relationships. The rather intriguing artwork that is presented in its six-panel sleeve hints at this, as each photo incorporates two distinct elements which contrast one another yet are somehow reliant in the same way. They are natural, but have an air of artifice about them.
Micromelancolié is a five-year-old project from Robert Skrzyński, and this is his first release on Zoharum under the moniker. He has also released material under his own name, as well as a variety of other aliases since 2003, including Forrrest Drones, MICROFL▼RSCNCE, and 12two100 with Bartosz Dziadosz of Pleq and Michał Nowacki of Side Result. It Doesn’t Belong Here is my first exposure to his work in any form.
The album begins in a rather composed, still fashion. Static combined with minimally processed field recordings can be heard over top of a low, slowly dissipating noise floor. In its five short minutes, ‘Wedding Songs and Funeral Laments’ sets the tone for some of the drama that lies ahead. The track takes up the implications of the latter half of its title, reflecting a sound that is haunting and not romantic in the least.
What follows is a clear talent for juxtaposing minimal elements together; it is obvious that Skrzyński is a skilled assembler of both sound and sensation. Mia Zabelka contributes her experimental violin treatments to one of the tracks, melding the acoustic with Skrzyński’s treated source material as heavy drones and subdued electronics become emphasized.
The album’s final piece, ‘Greeting and Farewell Songs (In Four Parts)’ is also its longest. Running at thirty-three minutes, the pace can finally be stretched out to cover a wider terrain. Distant voices can be heard singing ever so slightly above the din, at which point they disappear into the void entirely, only to be replaced by a drone growing in intensity as the track progresses.
This perpetual shifting between sound material is where the strength of It Doesn’t Belong Here really lies. There is much beauty to be found within its experimental corridors, and even though the sounds used are not always crystal clear, they benefit from their processed murkiness by way of a clever use of placement and contrast.
The relationships presented here are laid out as only Skrzyński could have intended. In the end, however, they are yours to reassemble, and yours to make the most sense of. It Doesn’t Belong Here is an intriguing world not only to visit, but to belong to.

Felthat:
Polish music scene has a great quality of people making music out of pure fun and will to please composer’s ambition rather than just a showcase adding up to PR of certain picture. It adds a great deal of fresh air among the visage of experimental music which is dominated by names from a few countries and keeps it all very timid.
Robert of Micromelancolié has been around for quite a time and since the first time I met him I knew exactly that he is a powerful sidekick to develop and rise soon. With his glitchy rain of sounds he never seemed to fit in a file of any music that I know apart from few bits which appeared to be just a set of traits that made it recognisable in a way.
His blend of lo-fi field recorded humms of environmental soundscapes, cassettey fuzz, no input mixing board glitches and sampled, processed sounds create a really subtle and intimate soundtrack for really anything that your mind can bent you on. I guess the truth of this vision is the creative process put into reigns and stead of one wholesome unit which also involves some improv but to extent of keeping everything in one nifty piece. Talking about improvisation we have here a shiny gem of Mia Zabelka, Austrian born violinist who acts up as a sonorous oil to the subtly rusty drones giving an extra asset of drama to Robert’s trip.
Bearing in mind how very active and how much diverse the output he leaves – I wouldn’t be surprised if he will surprise me with something as good as this cd or even better

AmbientBlog:
It seems I have missed some things in the past: Micromelancolié is a new name to me, but according to the discography on his site, Robert Skrzynski has already released around 30 titles (cassettes and CD/R) since 2009.Micromelancolié is a great name for his project.
Likewise, “It doesn’t belong here ” is a great album title, since that is exactly how the music sounds: as if it doesn’t belong here.These four sonic paintings are built around field recordings and found sounds.But the surroundings are estranged by merging found sounds, computer electronics, no-input mixing board sounds, microsamples and archival tracks (‘on the creative commons basis’).
Ánd even more by the added violin contribution by Mia Zabelka (on the title track).
The track titles have a cultural connotation, too: “Wedding Songs and Funeral Laments”, “Greeting and Farewell Songs”(In Three and Four parts – 4 and 33 minutes, respectively).
It’s like an audiophonic documentary of an alien world – a fascinating world … though at times I doubt if it’s a world you’d want to live in.