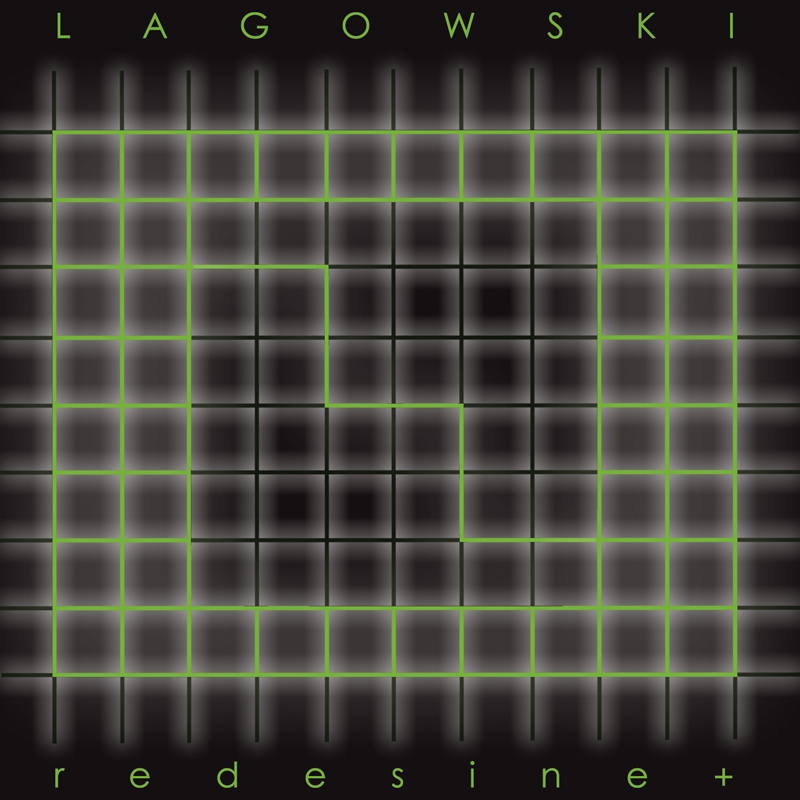 Vital Weekly:
Just today I mentioned the name Henk Zweering to someone and now there is a CD which is dedicated to him and one Silikon Answer. Zweering is not a musician but a fan, and as such I knew him from my days of (in-)voluntary work at a record shop. He knew the lot about music, and yes, I remember him as a fan of Lagowski. Here, Andrew lagowski returns to using his own name, for the first time since 2006. He’s been working with his old moniker S.E.T.I. and remastering works from that band, as well as Nagamatzu for re-issue. As Lagowski he plays music with a lot of rhythm, but are we to say dance music? I am afraid my knowledge as such is quite limited. I hardly dance (although not entirely don’t dance, when pushed in the right way), but somehow the darker moods brought to table, erm dance floor, by Andrew Lagowski don’t seem to me very dance floor like material. That is not say this isn’t fine music, far from it. This is the kind of home dance music which brings about a fine uplifting spirit – good music to do the dishes, vacuum cleaning or any such activity which requires some energetic input. These eighty minutes with thirteen tracks is such a soundtrack for homework. None of these leap out especially, but on the other hand none of this is weak track anyway. I must say I am not too familiar with all of Lagowski ‘dance’ output, so it’s not easy to add ‘great return to form’ or ‘the old days where so much better’, but I think this is a great release anyway.

Freq:
For his first album in seven years under his own name (rather than as S.E.T.I.), Andrew Lagowski seems to have decided to revisit every possible way of making synthesized music – let’s lump them all under the rubric of techno just for the moment – and give it an extra shove in various oblique directions. Sprinkled with bleeps, thwups, trickles and sprightly bursts of brightly-crafted sonics, Redesine+ is one of those records which tweaks and expands the template by which sequencers have both constrained and empowered electronic music for the last thirty-five+ years.
By turns dubby and angular, flecked with minimalist touches in a maximalist environment with the abstracted samples often flowing thick and fast, the thirteen tracks offer up a coruscating tumble of sounds which ripple and twist into contortions so supple that the effect can be dizzying at times. Breakbeats, thundering drum patterns, deracinated synthesisers, beauteous choral Mellotron-alikes provide a shimmering panoply. The whole album is flooded with warping melodies and wefting leftfield whirrs which stretch across a palette which is rooted somewhere in the same space as Autechre used to be before they became swallowed up by their own devices’ abstraction (this is not, however, a bad thing). What Lagowski serves up could be danced to, if desired, but the album can also just be allowed to take over the space into which it’s placed and left to redefine the fabric of space and time – because that’s what music does best, right?
Does that qualify Redesine+ as intelligent dance music, to bring back one of those Nineties genres which possibly never needed defining in quite those terms? Maybe so. More like tunes to make the listener’s neurons dance, if not always their body; and perfect for Kraftwerk‘s terpsichorean robots, only upgraded to a full set of mechanical limbs forming into an impossibly-complex series of big fish, little fish, cardboard box. Which would be so much fun to watch.
Like much sequenced electronic music, and especially the recent internet craze for so-called Black MIDI, Lagowski throws in so many notes that it would be functionally impossible for a human to play this music by hand. Where that clever trope delights in flinging a bazillion commands at pieces of classical or other music until their synaesthetic piano-roll videos bleed retro blitfests of migraine-inducing visuals, Redesine+ does something comparable to that minus the showboating, nor with any apparent devotion to complexity for its own sake. Far from being simply a shovelware spectacle, Redesine+ revels in its mechanistic properties while exuding a a very human warmth and a genuine sense of what can aptly be referred to as intelligent design at work, welcoming the listener as an occasionally befuddled guest in Lagowski’s own pocket electronic universe.

Santa Sangre:
An odd record which has now only become odder, Lagowski’s 2009 outing ‘Redesine’ gets an upgrade with four new tracks not originally included on the download-only version. It may seem like a strange choice to expand on this one if you’ve had it for a while but these new pieces are nothing to toy with and quite honestly, I don’t know where else they could have gone. After all those years spent honing his special brand of dark techno to a fine point, he’s loosened up over the last couple of releases under his own name. He has also become increasingly low-profile – as if that were possible – during this time. The work reflects this.
‘Redesine’ always came across as a bit of a mongrel when compared to the others, as though each piece was written as a stand-alone exercise with whatever software he happened to be playing around with. Rather than becoming cohesive, this re-released edition only leaves more of an ambiguous taste in the mind. It provokes questions and answers none of the ones you’d had previously, which may be the one defining factor. A definite puzzler; although the textures are very synthetic there is this strange sense that a bizarre strain of organic matter is at the core here. The soul of the machine is reaching out of the wires to attempt communication. The closer in you lean, the further away it gets which leads to playing it again. And again. And again.
His unique brand of high tech composition is in full swing but the matrix of sound is growing more difficult to define. He had a song years back named “Storms” which is what ‘Redesine’ feels like being in the midst of. An electronic maelstrom where the rules of physical space simply do not apply and god help you should your mind become distracted with all the myriad details on here. You’ll never find your way back, no matter how many bread crumbs you’ve put down. Something has been sweeping them up as soon as you turn your back.
So once again I have to ask, where exactly does ‘Redesine’ fit in his discography?
It doesn’t and the more I try to make sense of this the stranger Lagowski’s latest feels. Things are changing in his world, the shift which began on ‘Temporary Distractions’ in 2006 continues to gain momentum. Recombinant technological synthesis with an emphasis on transference of one’s consciousness. He’s programming future scenes wrought out of silicone and circuitry which grow in awareness with each passing year; I don’t doubt his music may be what crosses that final Rubicon: the Gordian knot of artificial intelligence.

Heathen Harvest:
I don’t believe it’s possible to find a more appropriate album to listen to while reading William Gibson‘s Neuromancer than Lagowski‘s Redesine+. The grimy, retro-futurist synths and chaotic pacing of the London-born Andrew Lagowski rides along with the cyberpunk thriller that is Gibson’s literary opus. Through neon-lit Sprawl streets and deadly virtual encounters, Lagowski interprets early ’90’s dance music in an unpredictable manner. Redesine+ is a physical reissue on Poland’s Zoharum of a previously all-digital version of this album, Redesine, from 2009. In terms of aesthetic quality, the release would feel most at home on an SD card or some sort of memory stick, but Zoharum has distributed the album in a more standard fashion. This CD contains four bonus tracks and appropriately circuitous packaging.
Since the early 1980s, Andrew Lagowski has been recording electronic music with influences from pioneering new wave artists. Initially a member of Nagamatzu, he later began producing music under the alias of Lagowski. This solo act pulled the industrial beats of his experimentations in new wave drum machines into bizarrely appealing mash-ups. His music, as seen in “Vermillion” and “Artificial,” soon gained the acidic house tendencies of the 1990s. This club rhythm has remained in a matured form as the foundation for his work leading up to this record. In the mid-1990s, Lagowski began releasing records under the monikers of S.E.T.I. and Legion. These two acts feature more ambient and abstract electronics. While sonically different from the techno he produces, the droning pieces maintain the dark, computerized certainty which can be heard at times on Redesine+.
As Lagowski has moved into the twenty-first century, he has maintained his solid drum patterns, jabbing synths, and sprinkled vocal samples. However, new layers of complexity make his albums even more compelling. Redesine+ features noticeable down-tempo and dub influences with old-school chants melded into a slower, but more crowded atmosphere. Breakbeats scatter themselves in sine waves. Manipulated samples of a soldier’s recollection in “Fehenalol v.2” suggest a violent overtone. Bizarre noises thought lost to the years resurface as an almost alternate universe of the modern times in which entering the cyber is a physical activity and menacing mega-corporations don’t try to hide their devious intentions. Redesine+‘s track titles seem in line with this dimension. They bring out images of unthinkably psychotropic chemical compounds, mysterious computer viruses, and futuristic constructs. The album is unmistakably fit for the computer age, albeit probably a more interesting one.
Redesine+ is filled with a deep understanding of electronic music and a communion with the drum machine at a bare-metal level. Lagowski pulls together years of experimentation in techno and ambient into his work. Wet synths and meaty drums make this record a throw-back to bleak science-fiction visions of computerized dystopia. While it could be argued that Lagowski reached his artistic peak in the 1990s, Redesine+ displays that his sound is still relevant and thoroughly addictive.

ChainDLK:
This new album from Andrew Lagowski marks the return, after more ambient-oriented projects, to territories admittedly related to 90s IDM and techno. So the classic form related to well known warp artist like Autechre or LFO resonate in the tracks of this album. Esthetically speaking, it’s not something new but, in this case, the important question is if the form is well constructed and enjoyable from the club perspective and the goal is achieved.
The album is divided in two parts: the first one is the proper ‘Redesine’ album where all tracks are constructed in an almost classical IDM mode: the juxtaposition of a complex dance beat, a bass line, a soundscape and a sort of loop in synch with the beat. From the lyric intro of ‘Skylanes V.8’ to the rhythm driven samples of ‘Binary Wave Rider’, from the warp-influenced tunes like ‘Carpenter V.9’ and ‘Urxeye’ to more techno oriented tracks like ‘They Follow You Everywhere (Vanilla Mix)’ or ‘Vocal Impulse Test’ this part is enjoyable as it’s carefully produced and it escapes the cliches of the genre.
The second part ‘+’ is the reissue bonus and is composed by four tracks: ‘Carpenter V.1’ constructed as a long synth introduction to a final part constructed upon a drum’n bass pattern. ‘SL6’ based upon a rhythmic synth line. ‘From Without V.13’ an almost synth pop track without vocals and ‘Raj Deep (3rd Level)’ revealing EBM influences.
Even if the first part is perhaps more catchy for the dance floor, the second is more courageous in search for a path untaken i.e, a personal musical form. Almost recommended for EAI fans and nice for everyone else.