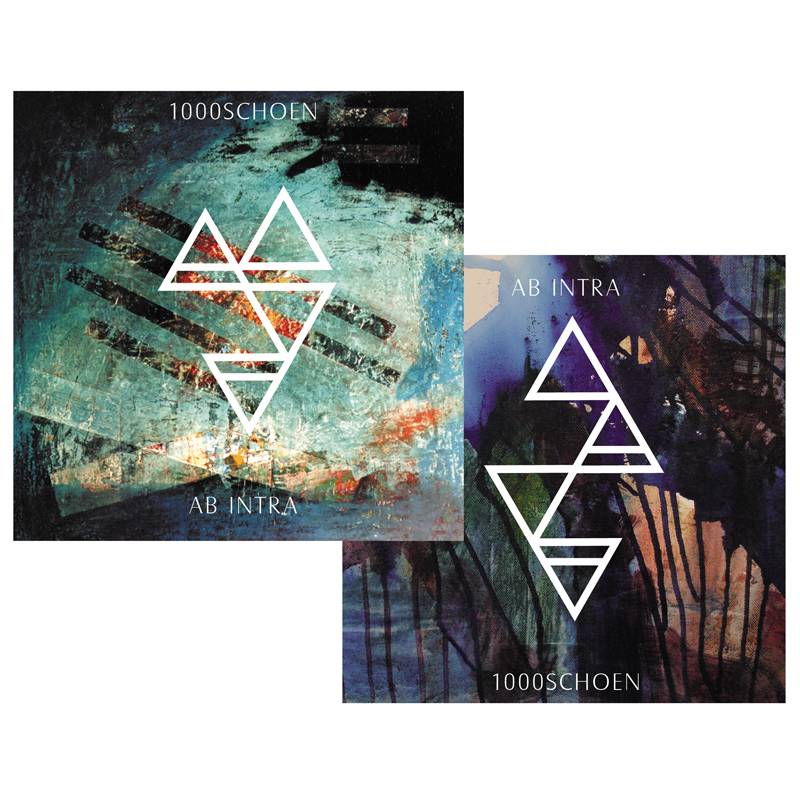 Santa Sangre:
The four elements are struggling on two CDs which are the result of a joint venture between 1000Schoen, one third of the legendary Maeror Tri, and Ab Intra, a project by Radek Kaminski, one of the most talented representatives of not just the Polish ambient scene. But since conceptually air, earth, fire and water all receive their time here, you can simply describe this split as a duel between the latter two forces of Nature.
Helge Moune presents three compositions on the first disc. Balancing between light and darkness, as if suspended between another transient from one form of existence to another. The German, in addition to standard ambient generating equipment uses natural, material sound sources. The first composition, “Cerbo Universe,” is good, but with time becomes a little tedious, the next two however are indeed top league – “Dead Shadow”, filled with a rhythmic sequence, with an amazing guitar part, stoking with emotions ready to explode at any moment. This is the specific type of ambient music, which instead of soothing or lulling to sleep makes that something pulses inside the listener, forces them to walk around restlessly from one corner to another and start to wonder how they can safely relieve the successively growing tension. “When The Shadow Falls” is probably based on the processed sound of strings or guitar. This composition bears a specifically cynical taste; it’s a bit like a curse drawled through clenched teeth. Or watching with wild satisfaction as someone whose achievements you’ve always been jealous of, lose their dignity. Such strange and somewhat absurd feelings are raised when I listen to 1000Schoen’s segment of the split. A quite restrained segment after all, not punching you in the face straightforward. The calm before the storm.
And you don’t have to wait long for it. After the first few seconds of “Entelecheia I” the listener is blown away by an aural maelstrom in such a way that they lose contact with any external factors. In contrast to the subdued, “watery” 1000Schoen, Ab Intra is a fire tempest. Where Helge whispers into the ear, Radek Kaminski yells in such a way that he rips the skin from the body. Dark ambient, very atmospheric, served in almost noise aesthetics. This doesn’t happen very often. In a review of “Supremus” I referred to Tim Hecker and I still maintain this comparison – I sense some spiritual understanding between the already recognized musician from Canada and our guy who has all the ambient world at his feet. “Entelecheia II” is the strongest part of this release, and perhaps the most powerful thing ever signed with the name of Ab Intra. It’s like an endless vortex that sucks in all human feeling, leaving the surface of the Earth filled with empty shells of bones and bodies roaming aimlessly and endlessly. All the love, hate, fear and euphoria are drawn, chewed and spat in the face of the listener, with all the power of a responsible entity . It reminds me of a quote from Dan Simmons’ “The Hollow Man”: “Jeremy Bremen did not see the sun rise in front of him. His hearing dimmed to nothing. The messages of fear and fatigue from his body failed to register; the increasing pressure on the trigger became a distant, forgotten thing. He concentrated with enough force to move objects, to pulverize bricks, to halt birds in their flight. For that briefest of milliseconds he had the choice of wavefront or particle, the choice of which existence he would embrace. The world screamed at him in five billion pain-filled voices demanding to be heard, five billion lost children waiting to be held, and he opened himself wide enough to hold all of them.” I feel it while dealing with “Entelecheia II”. It’s interesting that Radek uses synthetic sound only, as opposed to 1000Schoen, without resorting to instruments from the “outside” or to field recordings. Two different approaches to ambient, both very good. “III” is a bit calmer, while “Entelecheia IV” strikes again suddenly and without anaesthesia. The track is so powerful that one time my CD player simply refused to play it and shut itself down.
I have a small problem with the second disc where both artists placed one more composition each. No matter from which angle I look at the tracks, they seem to me the least interesting of all. I wouldn’t call them rejects as they’re still good, but at the same time I think that the release could go without them while losing nothing on its quality. It doesn’t change the fact that it’s still a duel of very high quality and … one that ends in a draw, with a small indication towards the side of Ab Intra. Few releases have been able to bedevil me so much recently.

Vital Weekly:
1000Schoen recently had a new double CD on Nitkie and here is another double CD, but a shared one with Ab Intra. The latter is from Poland and here they tackle the four elements. 1000Schoen does earth and fire and Ab Intra water and air. For whatever reason earth and air lead to no more than one track, but the others do. Also earth and air are on one CD and water and fire on the other. That’s nice, but I think not without risk. I played this and noted that both projects sound, more or less alike. Ambient, drones, atmospheric. The differences are in the details it seems. Both use a lot of electronics, but it seems that Ab Intra is all about electronics, modular synthesizers, soft synth or whatever and 1000schoen is more about treating acoustic sounds with electronics, and working with ringing and singing overtones. In ‘Turnanta Stalo’ this leads to a bit of heavy percussion, and nice overtones. It’s surely the most ‘different’ piece of the lot. What can be noted that both 1000schoen and Ab Intra they both have a very rich sound pallet. You might even say this is quite loud. This is something I also quite enjoyed from this release. I wish water and fire were a bit longer and beyond the thirty-four minutes they now are. This is some very excellent piece of drone music.

Heathen Harvest
I will admit to having a soft spot for split releases such as these. Biosphere and Deathprod, for example, have traditionally represented this format quite well through numerous releases including Nordheim Transformed and, more recently, Stator on the infamous Touch imprint, so I was well intrigued to uncover the mysteries behind the two artists featured on this double-disc release from Poland’s most prolific experimental label, Zoharum.
1000schøen has been Helge S. Moune’s solo project since 1998, and prior to this he was a member of German ambient/noise trio Maeror Tri, who recently received some postmortem support from our own Kate MacDonald with a review of their Mort aux vaches album. Here, Moune contributes four tracks that total fifty-seven minutes of varying degrees of drone, rhythm, and ambience.
Ab Intra is the vehicle for Radek Kamiński’s solo work, where he has spent virtually his entire career on Zoharum with a handful of releases since 2006. Ab Intra’s sound veers more towards a striking, multi-chord formation, and here treats us to five split movements of a single thematic composition.
The beauty of these split releases is that one never knows if they were composed in tandem with one another, or if the artists worked completely independently on mutually agreed-upon themes. Here, the tracks are grouped under the four classical elements: earth, air, water, fire. 1000schøen tackles earth and fire while Ab Intra splits his ‘Entelecheia‘ across air and water.
Entelechia is a word coined by Aristotle in his Physics that refers to both the action of being at work and the action of being at the end of work, or its completeness. This was how he opted to try and define the concept of motion as a kind of dual-natured approach linking the actuality and potentiality of a thing. Similarly, Ab Intra may be working on an approach to link air and water through a motion of his own definition.
I struggle to call Ab Intra’s pieces here ambient music, especially as one plays it at a louder volume (and please, don’t call it ‘power’ anything). There is enough distortion and feedback to challenge one’s expectations of such elemental music, and it succeeds on a multitude of levels that will reward on repeated listens.
1000schøen’s approach contrasts satisfyingly with Ab Intra’s. His world is filled with the ritual edge of percussion, the diligence of drone, and the layering of acoustic instrumentation. In some ways, this is a more palpable approach to the thematic elements of earth and fire, as both conjure up images of might, mystery, and majesty. The sounds are primal, lo-fi, and intermittently guttural. Low frequencies permeate the sound floor, punctured by percussive elements that grow in intensity.
This is a highly successful split release with both artists in top form, indirectly feeding off each other’s energy and methodology. For me, the true test of a successful split release is to try to imagine one artist’s contribution existing without the other’s alongside it. In this particular case, both 1000schøen and Ab Intra’s contributions are wholly strengthened by one another.