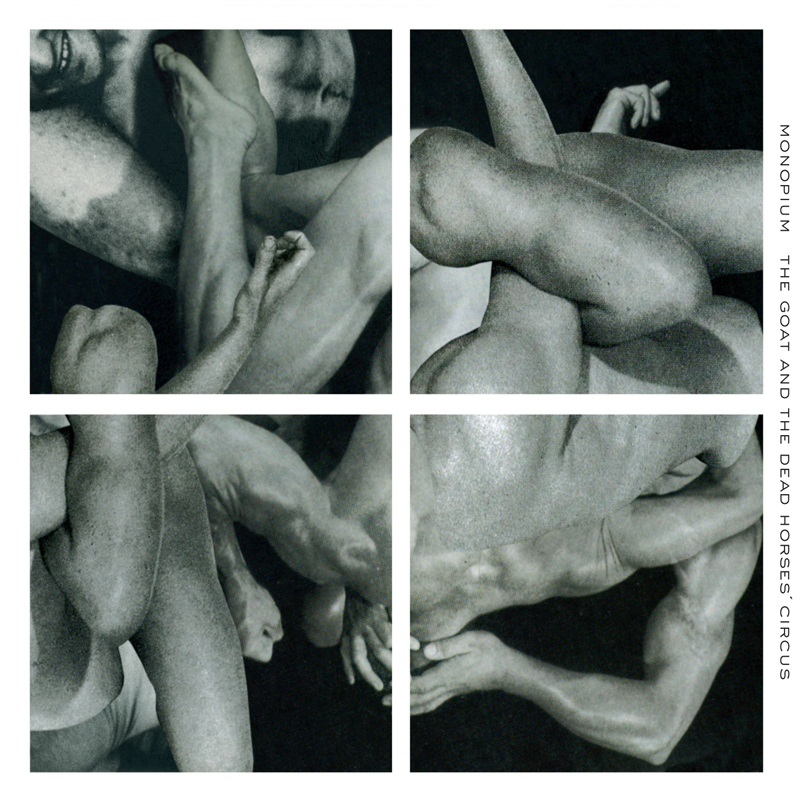 ChainDLK:
It takes almost two years to this polish band to compile the follow-up of their debut release and, in times where there are releases every three or four months, is quite a good news as this is an album of impressive quality. As the reader knows, I’ve reviewed almost every release of this polish label as, so, I have some reason to claim that this one is amongst the best releases of this label.
“Marble” opens this release as this album were a sort of jam between a jazz band and an ambient one and there was a radio lefts on during the session while “Flesh” is an ambient track with a jazz mood juxtaposed. “Piramidy” instead is based upon a quite strange loop above some small and sparse noises. “Dead Horses’ Circus” is a dreamy soundscape while “La Grande DÃ©ferlante” is based upon a dark loop and the impressive voice of EmmA WyrD. “Assassins” is a dark ambient interlude colored by an original saxophone line. “Fade Away” is based on Sci-Fi synth line as “La Primavera” is a small interlude based on string instrument and the hiss of an old tape. The quite old recording that opens “Lights & Serpentines” and colored by the bells introduce the listener to the final part of this release. “Sotto il Sole del Mondo” is a sample based track relying on the hypnotic effect of the samples. “As-Sawira” is the dreamy introduction to “La Primavera (My Final Bell)” where Euski gives his touch creating an atmosphere of great suggestion.
As a Nurse With Wound fan I enjoyed the courage of the musical path and the originality and variety of the solutions so this album is in my personal list of albums of the year. Amazing.

Avant Music News:
An utterly Dada journey through a distorted, happily degenerate late-nineteenth century Mitteleuropa, as if Tom Waits had dreamt Kurt Weill and Franz Kafka took him by the hand and armed with tape recorders, the trio traipsed giddily through the demimonde of circuses, nighttime theosophical society meetings, outdoor village bands, absinthe-soaked cabarets where gypsy girls dance with gaberdined rabbis and motley pick-pockets, and down twisty alleyways which though shrouded in dark at their entrance open onto fairground frivolity with a bear wearing a fez teaching Ukrainians to ride unicycles and children´s games being played by good-natured grown-ups. It´s a collage with no sense of being a cut-up and fragmentary, as a surreal, wheezy, woozy atmosphere is aimiably maintained in order from keeping you from going astray. Vocalists Emma Wyrd (of Chronique Nocturne) and Euski (Roma Amor) each emerge out of the haze, singing more to its accompaniment than dispel it. Compact and bijou at a tidy forty-three minutes, Monopium – Michał Majcher – has gene-modified these wispy strands of sepia ephemera to the thorough delight of postmodern ears.

Vital Weekly:
Michal Majcher is the man behind Monopium (great name I thought). Active since 2007, he released his first album, “Mesmerized’ on Beast Of Prey in 2009. I don’t think I heard that one. The music here on ‘The Goat And The Dead Horses’ Circus’ is easily classified as ‘odd’. Zoharum describes this “neo-cabaret, post-industrial electronics, musique concrete, drone and even free jazz, it draws associations with incidental musics for film noir, surrealist cinema and the dadaists” and I couldn’t agree more. Not something I necessarily like throughout, I must admit, as it carries some traces of gothic, pathetic undercurrent here and there, the sort of adult stuff about fairytales, but because it sounds quite different from what is usually on our plates, but still could easily be classified as ‘experimental’ by our own standards, this is certainly something I played with a lot of interest. It’s quite heavy on the percussion side of things, but also have tape manipulation, cello, voice s and
maybe field recordings – more water sounds here. A hotch-potch of instruments, and such perhaps of styles (although of course that’s not necessarily per se), this makes up indeed a curious CD, of all those things mentioned, and to which one could also add perhaps ambient and plunderphonics. Nice one for its daringly, different content.

Heathen Harvest:
Not everyone has fond memories of the circus. For some children (and adults too), few things are less enjoyable than cramming into a large, darkened room full of strangers as creepy clowns, dangerous animals, and a shouting ringmaster force their particular brand of entertainment upon the spectators. All manner of bad memories, fears, and phobias (such as coulrophobia, the fear of clowns) can sometimes result from these experiences. More recently, much controversy has surfaced around the treatment of animals in modern circuses with animal welfare groups documenting multiple cases of malnourishment, abuse, and neglect amongst those performing. This obviously doesn’t sound like Family Funday Sunday when seen from this perspective. For a lot of folks, either as gawking spectators or as performers within the circus (both animal and human), the circus is more a nightmare than something pleasant.
With that confusion in mind, let us enter into the bizarre big-top of Monopium’s The Goat and the Dead Horse’s Circus. The Polish musical act Monopium seem to have tapped into the darker underbelly of the modern circus and present us with their oddly titled (and I perceive only loosely-based) circus-themed second album. On it, we hear the trio continuing the unique musical trajectory they began with Mesmerized, their debut album, which was released by Beast of Prey in 2009. As described by the Zoharum label, TGATDHC is a combination of abstract, degenerated, and manipulated sounds, voices, and percussion that champion the ethos of Dadaism and Surrealism / Post-modernism. In other words, the music here embraces the notion that nonsense, irrationality, and intuition should win out over reason, coherence, and logic. In this musical world, logic and rationality are thrown out altogether in favor of something more organic, inexplicably free, and open-ended.
Although the album and song titles can be somewhat helpful to listeners in conjuring up visions of what might be going on within these tracks – it’s all very vague and open to interpretation, mind you – it’s inevitably up to the listeners to piece things together in a manner that they choose. Each listening experience yields different imaginary vignettes to support the music at hand. As with all surrealist art, there’s no right or wrong in this grotesque carnival world; there’s only what one might envision as constrained by the limits of the imagination.
The abstract approach Monopium take works fairly well, allowing the group to experiment with combining a number of musical styles – ambient, free-form jazz percussion, cabaret, psychedelic, found sounds, etc. – to express themselves without necessarily aligning themselves too closely with any of those styles. In this way, Monopium belong nowhere and to no one but their own outlandish and freakish sideshow of musical oddities. Though the album could potentially alienate listeners due to its tendency to be sluggishly hypnagogic and repetitive in spots, it is effortlessly constructed and pieced together. This makes for a smooth and freakish listening experience, so most listeners of the genres in which Monopium explore are bound to find something, perhaps many things, they can connect with and enjoy on The Goat….
The album also sounds naturally antiquated. Did Monopium somehow master the art of time travel? It sounds like they jettisoned back into the past to record source material – perhaps at some obscure European circus – captured the sounds on wax cylinders, buried the recordings in some secret location, and returned back to the present day to then dig up the cylinders and began digitizing and piecing it all together, with TGATDHC being the result. Some of the best examples of this would be the noir-ish and crackly “Flesh”, the hallucinatory amusement park sound of “The Dead Horse’s Circus”, or the old radio/phonograph transmission of “La Primavera”. In fact, the cover image and inner photography are represented well by the mood those specific songs convey. This bygone atmosphere of static, crackle, strange voices, and antique sounding instrumentation gives the album an air of authenticity that transports the listener to another time and another place, far away from the modern creature comforts of wherever they happening to be listening.
Monopium have masterminded an album of generally impressive minimal and experimental ambient. The Goat… is a unique and fluid amalgamation of sounds that mostly succeeds in its own peculiar surrealist vision. Monopium can be a bit repetitive in their use of loops, and their surrealist approach might be irritating to those seeking experimental music with more definitive edges as it can occasionally seem as if the songs begin and just listlessly exist for a time before ending without much resolution or closure. With that being said, couldn’t we also argue that this is a part of what makes surrealist art what it is – no right or wrong, the known replaced by the unknown, all previously accepted borders rejected for a mystery that lies beyond – and that the album largely succeeds because of those very reasons? Of course we can. All art and music elicits a response of either acceptance or rejection, and Monopium’s TGATDHC is no exception. I strongly feel that the album is unique and worth exploring to find out which of those sides you might stand on after having experienced this auditory circus.