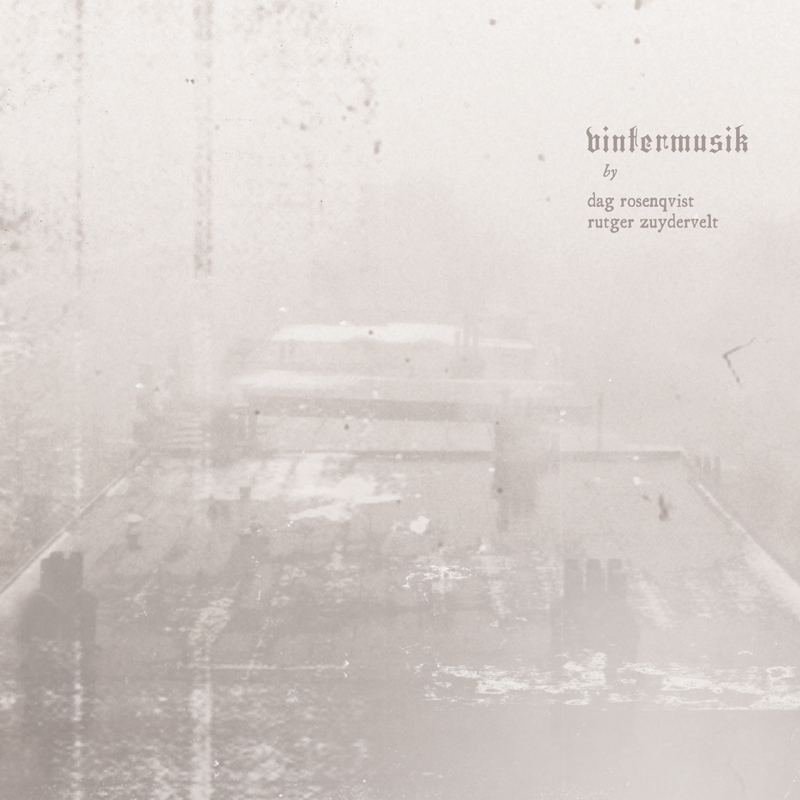 Heathen Harvest
It’s always been curious for me that winter is the season of choice for dark ambient musicians. Yes, it can be foreboding and dangerous, but so can any season. Summer has heatwaves and storms, for example. The harshest time of the year in some places is autumn, not winter. Winter can also be the most beautiful time of year: the majesty of falling snow, the twinkling of moonlight on a snow-covered field, the reverence of white-capped peaks. Perhaps the season’s versatility and its hidden-yet-very-near sense of danger is the cause for such attraction.
Vintermusik falls somewhere between the two extremes of the season but soon ventures into a frozen landscape none of us will ever tread. A collaboration between Dag Rosenqvist and the multi-talented Rutger Zuydervelt (perhaps best known as Machinefabriek), the album was originally released in 2007 and has been repackaged by Polish label Zoharum, adding the twenty-four-minute “Feberdrom (Koortsdroom),” which was previously released as a 3” CD-R. The album is largely composed of lo-fi drones, with Zuydervelt’s treated guitars merging with Rosenqvist’s keyboards and samples. Vintermusik is not a dark album, but drifts along in a pleasing shade of grayish white; its darkness comes from the strange mood it conjures. Neither is it soporific, owing to the experimental display of samples sprinkled throughout. The album’s artwork, featuring washed-out and blurred urban landscapes, is ideal. It is equally beautiful and mysterious, with a touch of unease, just like the season for which it is named.
The album peaks when it delves into the experimental. The drones are quite typical for the genre—solid and simple, establishing a twilit mood without drawing the shadows too near—and if that was all Vintermusik had to offer, it would be little more than unremarkable background noise, unobtrusive to a fault. Fortunately, Rosenqvist and Zuydervelt recognize this and ensure their compositions don’t lose themselves in mere white noise. While Vintermusik does fall into foggy stretches (the previously mentioned “Feberdrom” is too long and too underdeveloped to hold interest for its duration), it does create an unusually effective atmosphere when everything clicks.
“Gras som bryts och gar sav (Gras dat knakt en breekt)” (each track has two titles, which I believe are the same thing in different languages) accomplishes this by beginning with a gentle sound of wind and a series of pops that could be radio static, crackling embers, or an attempt at old-school vinyl distortion, before lightly treated strummed guitar chords make an entrance, dressed with a delicate keyboard tone. Eventually, the synthetic elements drop out, until only the plaintive guitar remains. If either the guitar or the electronics were the lone elements behind the music, the track would be much too barren; together, they combine into something unique and memorable.
“Blasa Rok (Rook Blasen)” takes this a step further, with a series of rustles, fumbles, and scratches, creating a strange claustrophobia to the otherwise calming piano melody. Eventually, the track dissolves into a quiet drone accompanied by buried touches of detail, and the track ends with a distorted tune that sounds like it’s being heard from someone’s attic on a near-broken phonograph at half-speed. The sense of lost time is thick here, and carries an unease that keeps Vintermusik from straying into feel-good seasonal music. “Tappad vante (Verloren want)” follows this lead with a similarlaged sample of guitar and horn snatched from the ether of forgotten time.
The album reaches strange heights on “Ljus i November (Licht in November),” a phenomenal work of drowned guitar feedback and bass thrums that segues into meandering static-laced piano and the laughing voices of children playing, presumably, in the snow. From there, we hear a slow deep violin flanked by more distorted fiddling. It’s a deliciously haunting piece that maintains its elusive mood in spite of how it changes. “Islossning (Ijsbreken)” begins with looped strings and mild scraping, then opens up with the same starkly beautiful synths that mark most of the album. When distant, wordless vocals emerge, eventually moving into alien levels of pitch-shifting, they give organic voice to the same gray wonder encompassing Vintermusik. At this point, the track has moved into deeply hypnotic territory, gently and easily, while the immersion has quietly slid to a rare level. This is the sound of a winter none of us have ever seen.
The varied approach of Vintermusik imparts a special kind of depth. When it slips free of drone and delves into the experimental, the album becomes a special exercise in atmospheric creativity, and it keeps its identity firmly in spite of how each track evolves. Rosenqvist and Zuydervelt have produced an unexpected album that draws you gently in, and before you realize it, you’ve been swept far away from the places you know. It’s for albums like this that I love music as I do: for its power to transport me to places that don’t exist. Beautiful and harrowing, memorable and unnerving, Vintermusik is a hymn to what is, without a doubt, the most eerie and mysterious of seasons. Rarely has any album given winter its due with such precision.

Freq:
Originally appearing in 2006 as a limited CDR, Vintermusik finds Machinefabriek‘s alter ego Rutger Zuydervelt collaborating at a distance with Dag Rosenqvist (sometimes AKA Jasper TX) over seven tracks (plus bonus “Feberdröm / Koortsdroom”, which appeared on a 3” CDR in the same era). As the title indicates, this is music with a cold exterior, but which still allows for a warmth to reside at its heart(h), crackling in the fire-like ripples, the rumble of what could be perceived as imperceptible glacial movement or the slow slumbering breath of organic life in hibernation.There’s plenty of chilly, if not entirely chilled, synthetic and electronic textures to engender suitably hivernal feelings, of the quietude of snow and the icy blasts of cold air from the poles. There’s barely-hinted at scurries and slides among the frosty hums and lightly-accreting glitches; almost inevitably, the scrape and clang of gong-like tones on “Gräs Som Bryts Och Går Av / Gras Dat Knakt En Breekt” cannot fail but to briefly bring the permafrost so eloquently envisaged by Thomas Köner to mind — though Rosenqvist and Zuydervelt’s winter feels much shorter and more musical by comparison, even joyously so at times.
In that respect, a piece like “Blâsa Rök / Rook Blazen” could easily sit beside Banjo Or Freakout‘s rather remarkably out there glitchy XA Christmas albums, sharing a similar sense of the feeling of midwinter and all its surrounding festivities rather than its more traditional rendering in song. At other times, Vintermusik shifts into full-blooded noise-drone mode, jagged, piercing shards of sound shattering any semblance of wintry calm on waves of feedback which segues rather disquietingly and beatifically into the gentle piano figures and the loops of the excited laughter of children on “Ljus I November / Licht In November” – and that tinkling could possibly be sleigh bells, but is more likely synthetic detritus.
Original closing track “Islossning / Ijsbreken” is a particularly evocative composition, gliding and rising on shuffling micro-samples and a choral hum which captures the crunch of snow and the most thoughtful time of the year in movingly sonorous fashion. Afterwards, however, the 23 extra minutes of “Feberdröm / Koortsdroom” take matters for one more spin into the cold, wastes of radio-staticky machines chattering among themselves.
By the album’s close, it feels like Rosenqvist and Zuyderveldt have successfully mapped out a particular idea of the season on Vintermusik that rarely descends into the obvious. All the while, they allowing themselves space and time to play with some tropes of the musical winterscape along the way, demonstrating that musique concrète is not just for the day to day, but perhaps can make reference to the festive season too.

Vital Weekly:
With some recognition (to avoid the word fame), Rutger Zuydervelt, also known as Machinefabriek, can always lean back and grab an oldie but goodie (and sold-out-ie) from the shelf and have it re-released. This is what happens here: The first six pieces were released in January 2007 on a CDR by the musicians themselves and probably didn’t make it to these pages, and ‘Feberdröm (Koortsdroom)’ was released in December 2007 as a 3″CDR and reviewed in Vital Weekly 609. All of this now compiled on ‘Vintermusik’, a proper CD version of all the work by Dag Rosenqvist (sometimes also known as Jasper TX) and Rutger Zuydervelt. It’s after all these years still not possible to tell who did what on these recordings, as for instruments and mixes that is. The original 3″CDR is placed at the end of this release back then I wrote: “… it’s a great work. High static crackles, a mid-range bed of warm drones and a bass that rumbles somewhere below. Much along the recent works of Machinefabriek, and a sound that brought him his fame so far. Maybe there is a risk of repeating, but no doubt the fans will take that for granted. Nice one.” The other five pieces follow a similar schematic, I think: lots of drone like sounds, generated by guitars and loop devices (and who knows what else from the electronics department) and all of this creating a solid hour of the finest dark ambient. Nothing new, but what did you expect from a re-issue? Fine quality, through out all of this. (FdW)

ChainDLK:
This album is a reissue from a CDr from Rutger Zuydervelt, known as Machinefabriek, and Dag Rosenqvist that sounds as an experiments of contemplative and evocative music that sounds unfinished but, so, incredibly honest and childish in his developments.
‘Frost / Vries’ opens slowly this release with static layers of drones evoking a snow that falls with the brightness of the light reflections. ‘GrÃ¤s Som Bryts Och GÃ¥r Av / Gras Dat Knakt En Breekt’ starts an exercise on isolationism and ends as a quiet ambient track. ‘BlÃ¥sa RÃ¶k / Rook Blazen’ is based upon a guitar lines upon a soundscape and a distant drum that evolves in a static drone and ends with an old recording sample that ends with a stylus fault. ‘Ljus I November / Licht In November’ starts as the noisier track of this album as it’s focused on the guitar distortions but ends as the most ethereal one as the child’s field recordings and the piano creates a romantic atmosphere. ‘Tappad Vante / Verloren Want’ sounds as an introduction to ‘Islossning / Ijsbreken’ that closes the original release with layers of drones carefully constructed to quietly close the release.
‘FeberdrÃ¶m / Koortsdroom’ is a bonus track from another CDr and is based on resonances and filters to create a meditative atmosphere.
This release could not be as remarkable as the latest releases from Machinefabriek but it’s so emotive and appealing that sounds as a christmas’ gift to his fans. A nice release.