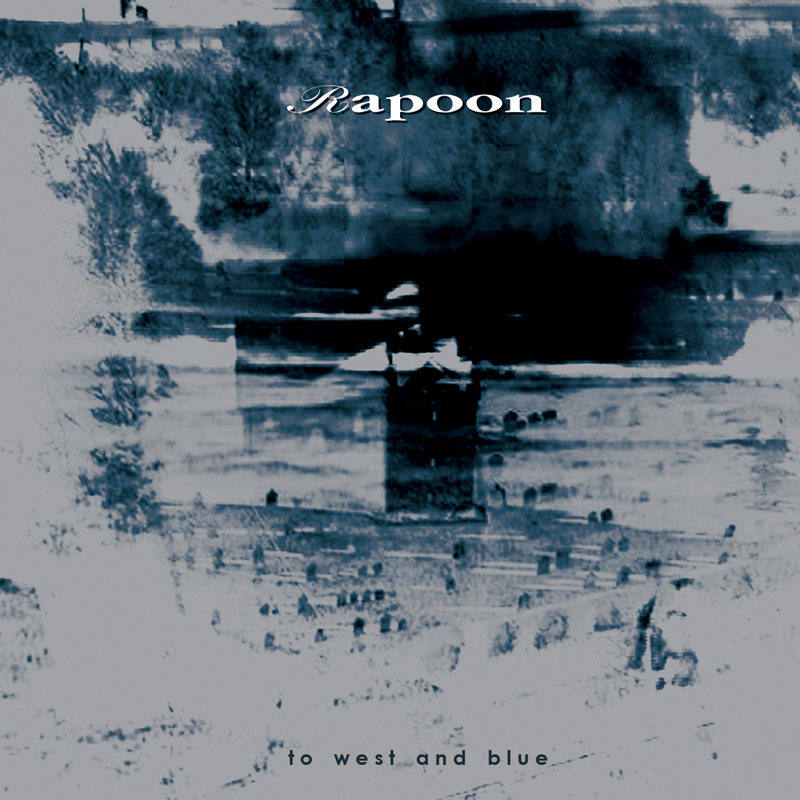 To west and blue

The Sound Projector:
Rapoon is Robin Storey who was half of zoviet_France for the first couple of years of its history, so if you are familiar with that particular project, then you don’t need me to tell you where To West And Blue is going to rest in the canon of ambient music and you’re probably already well aware of Storey’s ouvre besides.
Drift. Ennui. Dereliction. Quite honestly, I feel like I’m lost (in a good way) whenever I put this album on the cd deck, so gossamer is the content – perhaps that’s the intention.
The opener, “East Window Lights”, is a carpet of church organ, medium pile. Storey withholds melody to create an ever-so slightly enhanced perception of colour like when you are halfway through a 36 hour fast and/or consuming over six cups of coffee a day. A constant reassuring thrum of backwards tape, or the digital approximation of same. Palm fronds swaying in a slight breeze in early summer; around 21 degrees celsius. Does this piece of music have an abstracted sense of Englishness? The title is intriguing; implying a romantic night-time cityscape of electric light, and though l like the sudden pads which end the track, I’m forced to concede that it could just as well simply be a banal view of the wall from his chair in the studio.
In the next piece, “Solace”, the piano feels its way across the wastes of ambience, and I like the way the brass sounds which I initially took to be trumpet around the two minute mark, reveal themselves to be synth. We then experience some great thumb piano, and the apocalyptic groaning of the very earth itself rending in two. Surely this is the sound of the rending of time and space? Also, I could swear that Storey has inserted the Dr Who TARDIS sound way back in the mix for a joke? Girders swing at you out of the blackness, barely missing your nose. “Solace” later sounds like tongue drums – at least it is reminiscent of rainforest tribal music from endless bbc documentaries to me, at least. Towards the end there are clusters of piano melody – almost like Storey left in some evidence of him trying out ideas…
The third track, “The Gold Of Salvation”, is pure synth pad drone fx. This would definitely complement nocturnal “altered states”, and I don’t mean the film – in fact it reminds me of the thrill of hearing Future Sound Of London for the first time 20 years ago. Soporific. And short. Next, “A Heavy Door Locked” foregrounds metallic sources grinding in the distance amplified by delays while analogue synth bloops and digital vocal effects cut in from the outer cosmos. Fluttering sci-fi eeriness. Stockhausen bloop. EMS-style bit-blurt.
“Broken Eagle, Broken Sunset” could be described as voxsynth drone; quite fast-moving comparatively. Vocal samples float around, usually exotic singers. No surprises here. Rolling onwards without proscribed destination which is fine when you are in the woods. I could use a little more variety in the source material and detail in the production personally but otherwise still a tasteful and useable addition. To my mind this goes on a little too long and maybe outstays its welcome for me with its heavy repetition although its long quiet ending makes sense structurally as far as the album as a whole is concerned.
Track six “An Angel’s Breath” I almost mis-read the title of this on the car’s information screen as “An Angel’s Breakfast”. Now that would be quite an interesting subject to guess at but the angel’s breath in question here seems to consist predominantly of Storey’s ever-present digital delay (did he acquire an Eventide Harmonizer 20 years ago and just get seduced by the superb quality of the reverbs and delays?) And lifted choirs, birdsong with no real momentum, but hey I ain’t complaining. If you aren’t looking for momentum, then that’s not a problem. I have no wish to hark back nostalgically to the Brian Eno epoch because I think music and technology have moved on farther than makes any of that stuff relevant now, but just to contradict myself I will say that it reminded me of Popul Vuh’s soundtrack music for Werner Herzog’s Fitzcarraldo but you shouldn’t read anything into that.
The title track which completes this album, “To West And Blue”, has a very confusing, yet pleasing, set of counter-rhythms with an almost motoric feel. Indeed, it’s fourteen minutes of blissful effulgence. A digital ocean washing up on an analogue beach. Great late-night listening.

Santa Sangre:
Yet another proposition by Rapoon under the aegis of Zoharum is this piece of brand new music by Robin Storey. No reissues, archival collections or other such rarities, but a handful of fresh and tasty sounds. In addition, it is a certain jubilee: Rapoon’s 50th release. Zoharum certainly swells with pride. And well, it has every right to do so.
Especially that Robin’s ambient is absolutely professionally crafted, but I suppose that fact is no surprise to anyone. The musician knows his job, and my personal highlight of the album is the sixth track, called “An Angels Breath”, where Storey blends organic spaces, ethnic microfragments, beautiful choir samples and shreds of rhythm hidden deep in the background. It’s a pretty representative slice of the whole album; dreamy, sometimes a bit abstract, devoid of right angles and sharp edges.
Already the first composition invites the listener in a suggestive manner to its blue, slightly cloudy world straight from the album cover. Worth mentioning is the fact that the front cover is painted by Robin Storey himself. “East Window Lights”, subdued, somewhat mysterious, intriguing … But it was “Solace” which took over my soul, and has turned a grey January in Katowice to Northern England during autumn season: the Irish Sea coast, fishermen stranding their nets, preparing for another fishing trip, waves vigorously crashing against the rocks and cliffs. After “Solace” I was bought, and the other tracks only intensified such sensations. The captivating “The Gold Of Salvation”, the surreal “A Heavy Door Locked”… Also “Broken Eagle, Broken Sunset” is oddly beautiful with its several looped motifs. Seemingly soothing, assisting entrance into the dreamland, but behind the window you can see this flashing, warning red light trying to break through the fog.
The last piece, “To West And Blue” seems to be the most dynamic of all, and not because of the variety or suggestiveness of its rhythmic parts. It just seems like there’s some sort of energy bursting out from the composition’s very core, as if Robin was shouting “Hey, wake up, time to get back to the real world!” Of course he does it with class as it’s actually a great final track.
It’s hard to keep in shape for so many years, but Robin is successful in this matter. Sure, some releases were more to my liking, others less, but this British musician never went down below a certain level. And created some really good compositions on his anniversary. Keep it up, Mr. Storey, keep it up.

Felthat:
Zoharum rolls down the hill like a huge snowball. A quality choice of releases, distinctive style of design and the publisher’s choice of formats and foremostly very professional approach.
Robin Storey’s fifth album for Zoharum and 50th album in the whole discography is nicely packaged art piece with subtle and delicate ambient sounds made with human voice, synth sounds and processed tracks in a manner of post-industrial of 1990’s but as good as it can possibly be – very fresh and swift as ever. A really good piece of ambience wrapped up in delicate experimentation with no exaggerated references to minimalistic drone sounds to me more like a contemporary symphonical music – hidden somewhere and undiscovered. There is a great deal of privacy feeling to it. It pours slowly and extensively. Time to withdraw yourself…

Ghosts From A Machine

Seeds in the Tide Volume 5

My Life as a Ghost

Seeds in the Tide volume 04

What Do You Suppose? / Project Blue Book

Seeds in the Tide Volume 03

The Fires of the Borderlands

Seeds in the Tide Volume 02

To west and blue

Seeds in the Tide Volume 01